Types and Sizes of  Grand Pianos

Grand Pianos:  The reasons for the preference which most people show for a Grand to an Upright piano are probably aesthetic and psychological. A Grand looks better in a room, and the pianist is more favorably impressed by the “view” when he sits down to play a Grand, compared with an Upright, which usually stands with its back to a wall. Another advantage is that the top, when raised, deflects the sound to player and room. Unfortunately, this preference brought about the production of miniature Grand pianos which are inferior in tone and touch to a good Upright and are described in the trade as “Small Grand Pianos”. The action in such models was cut down in size and price, and the strings are too short; in fact, the minimum size for a Grand seems to be 4 ft.10 in. if the instrument is to be considered as a serious rival to a good Upright.

Sizes and Types: The standard width of a grand piano is also about 5'. The length varies from 4˝' to 9˝'. The total floor space allowance for the smallest grand should be at least 5' wide by 6˝' long, including bench space. Grand pianos are measure by the length from the very front of the keyboard to the farthest end of the piano along the spine, with the lid closed. The smallest Steinway is 5 ft. 1 in. (The size stated is always the over-all length of an instrument.) There are several types of grand pianos, based on piano length.  Click on image for example of size and specifications:

Tonal Quality - The soundboard and strings of a grand piano are positioned horizontally inside the piano case. When you press down a key, the hammer of the key hits the strings from below to produce the sound. The movement of the hammer falls back with the help of gravity, which makes the sound of repetitive notes crisp and allows the pianist better control of the keys. The size of the soundboard and the length of strings influence the tonal quality of a piano. Larger soundboard and longer strings produce greater volume and resonance of tone.

European and Asian Grand Pianos are measured by length in cm.
(Size is reflected in Model Number at times) 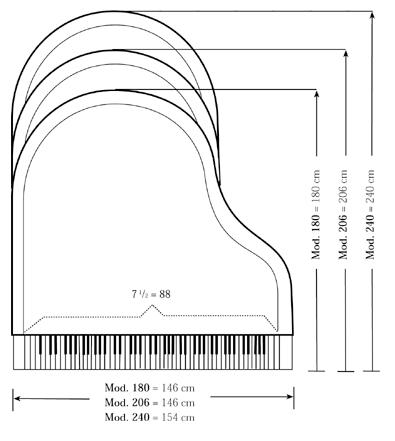 Recommendation: Since the tonal quality and the volume of the piano depend mainly on the size of the soundboard and the length of the strings, you want to start from the largest vertical or grand piano you can afford. You also need to consider the space you have. The sound of a Small Grand can get lost in a large open room where a Medium Grand in a small room can be too loud.

A craze for very small size also afflicted Upright pianos. With the result that miniature models appeared which could only be classed as toys. The height was reduced by lowering the position of the action in relation to the keyboard, so that the lever was pulled up by the key instead of being lifted in the normal way. This type of piano sold as a “Spinet”. When compared with the small Grand pianos condemned in the previous paragraph, these miniature Uprights sink to about the same depth of tonal and acoustic banality. I can appreciate the demand for small pianos for small rooms, and in small orchestras where space is limited and the player must be able to see the leader, but I cannot see the sense of mutilating the tone and touch of a piano merely to reduce the height by a further three or four inches.

Sizes and Types - The standard width of an upright piano is about 5' and the depth is between 2 - 2˝'. The total floor space allowance should be about 5' wide by 5' deep, including bench space. The height of the piano makes no difference in the floor space needed but it makes a major difference in the quality of sound the piano produces. The height of a vertical piano is measured from the floor to the top of the piano. There are four types of vertical pianos, based on piano height:  Spinet, Console, Studio, and Upright. The size is measured from the floor to the top of the lid. The spinet piano measures less than 36" tall. The console measures 40 to 44" tall. The studio or "professional upright" measures 45 to 50" tall. The largest of the vertical pianos is the upright, which measures over 50" tall.

Studio Pianos The additional height of the studio piano gives it a richness and tonal quality comparable to those of many grand pianos. The location and feel of the action is also different in a studio piano. Many of the newer studio pianos mimic the feel of a grand piano.

Upright Pianos: The tallest of the vertical pianos is the upright. Today this term is usually used to refer to the older, tall pianos - Grandma's piano. There were many wonderful upright pianos made in America in the 1920 - 1940's. If properly preserved these old pianos are some of the most esthetically beautiful and durable instruments ever made. The key is "properly preserved". If not properly maintained an old upright's only value is as a large piece of furniture, beautiful to look at but nerve racking to listen to.

You have the right to consult, modify, rectify or delete information that concerns you. To claim these rights, contact us. The site, including the elements that comprise it, is exclusive property of the company: Bluebook of Piano, the sole entity entitled to use the intellectual property rights and the related personality rights. Moreover, the models of presented products are registered and therefore protected by intellectual property rights.